Australia Awards supports Scholarship recipients and Short Course participants to develop their skills and knowledge and build networks to drive change and contribute to development in their home countries.

A recent survey of Australia Awards graduates from South Asia and Mongolia provides evidence that Scholarship and Short Course alumni are using their new knowledge, skills and experience in their current employment. The survey also highlights how alumni are passing on their knowledge and skills to others; how they perceived their time in Australia; and what relationships they have built with other alumni and people they met through Australia Awards.

The Alumni Development Impact Survey (ADIS) takes place annually in April/May and September/October. ADIS has been used in South Asia and Mongolia as the key monitoring and evaluation activity for Australia Awards; the survey tool is reviewed and updated annually. Alumni who completed their Scholarship approximately 18–24 months or 36–42 months before the survey date or who completed a Short Course approximately 6–12 months before the survey date are invited to participate in the survey.

The September/October 2022 ADIS round conducted with alumni from South Asia and Mongolia recorded a significant percentage of alumni reporting ongoing benefits from their Australia Awards experience in a variety of ways. Key findings are summarised below.

Ninety-seven Scholarship alumni from South Asia (54 per cent women and 46 per cent men) participated in the recent survey. Of these alumni, 95 per cent said they were employed and applying the skills and knowledge they gained while studying in Australia in their current workplaces. Fifty-nine alumni (59 per cent) had gained career advancement within 18–24 or 36–42 months after returning from Australia. Of those who gained career advancement, 91 per cent felt that Australia Awards made a contribution to their higher position (with the extent of the contribution ranging from moderate to very significant). 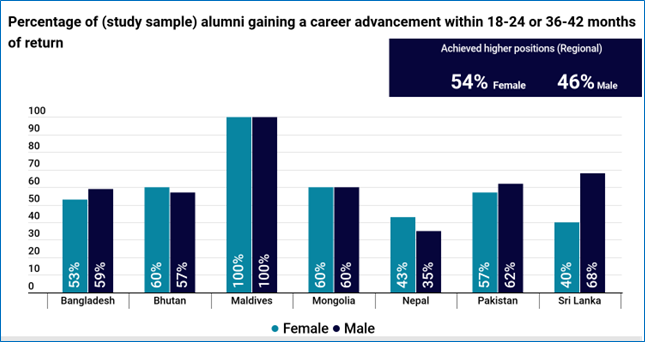 Almost all respondents (99 per cent) said that their Australia Awards Scholarship was the best way to build their skills, networks and experience so they can contribute to the development of their country.

Describing how he had applied the knowledge he gained in Australia for the benefit of his own country, one of the participants from Bangladesh said, “I involved local communities in Bangladesh in bringing solutions for drinking water supply, increasing food production, empowering women through income generating activities, establishing cooperatives among 85 landless and homeless families, reducing child marriage, and building resilience in disaster prone and climate change affected communities as a coordinator of both government and non-government organisations.”

Another survey participant—a Mongolian alumna—said, “I have been working on the ‘Combating domestic violence against women and children’ project, funded by Asian Development Bank and implemented by the Ministry of Justice and Home Affairs [in Mongolia]. I now use and apply the knowledge and experience I gained in Australia, especially in gender and human rights, in my daily work. In particular, I have worked with a consulting firm to develop a ‘peer educator and support group program’ for people with disability.”

When questioned about whether they still maintained relationships that they had built through Australia Awards, 82 per cent of survey participants said that they remained in touch with fellow Australia Awards alumni from their own country. Sixty per cent said they maintained links with professors, lecturers and other staff at their universities, while 86 per cent said they were still in contact with international students from other countries at their universities.

The graph below shows how many Scholarship alumni (as a percentage of the survey sample) reported maintaining formal or informal linkages they developed through Australia Awards, in relation to various groups. 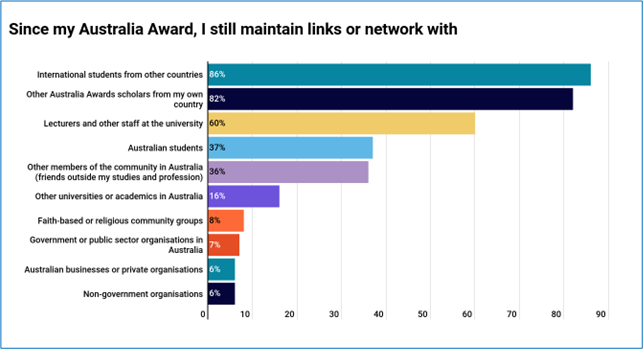 Fifty-eight alumni (58 per cent) said that they are using the relationships and networks they developed during their Scholarship to help their employer or their business to partner with people and organisations in Australia.

When asked to provide an example, an alum from Nepal said, “I am coordinating with the Development Head of the Australian Embassy in Nepal to prepare Irrigation Master Plans and River Basin Plans for major rivers in Nepal. I am also collaborating on industry experience with students studying a master’s degree in Australia in the field of agriculture.”

In addition, an alumnus from Sri Lanka said, “I invited colleagues from my degree program in Australia to contribute to the learning experience of the psychology students at the Sri Lanka Institute of Information Technology. They shared and discussed their experience working as counsellors in Australia, as well as knowledge from their higher studies in psychology and counselling.”

Nine Short Course alumni from Sri Lanka (3 women and 6 men) participated in the most recent ADIS survey round. Of these alumni, all said they were currently employed, with the majority (5 alumni) being employed in the public sector. All participants believed that their Australia Awards Short Course was a good opportunity for them to build their skills, networks and experience so they can contribute to the development of their country.

Eighty-nine per cent were confident that the skills and knowledge developed through their Australia Awards Short Course are relevant and will enable them to contribute to the development of their home country.

As an example, an alumnus from the Short Course in Business Incubation Management said, “I have mentored new hotel operators who want to start new businesses after the economic downturn.”

Due to restrictions related to the COVID-19 pandemic, the Short Course alumni eligible for this ADIS round (i.e. those who had completed their course 6–12 months before the survey was conducted) were few in number, and limited to Sri Lanka. Future ADIS rounds will produce more statistically significant results for Short Course alumni.